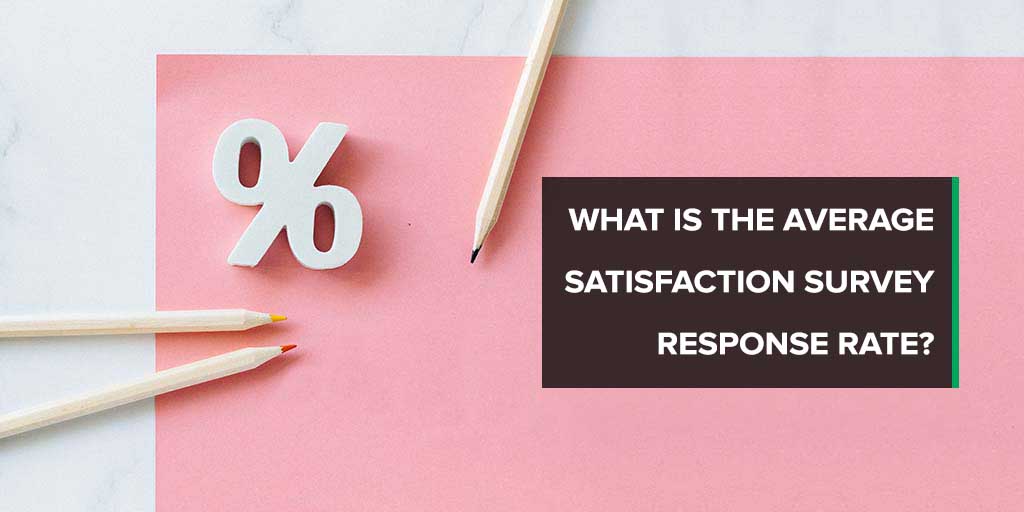 What is the Average Satisfaction Survey Response Rate?

Have you ever wondered what the average response rate to a satisfaction survey is, or more generally, to an online survey? There are few published statistics on the topic. But it’s still an important question, essential even, to know whether your campaign response rate is satisfactory or in need of improvement.

To make up for this shortcoming and to help you assess your survey campaign performance, we’ve analysed the statistics of campaigns deployed by Skeepers users to give you a reliable general idea.

Skeepers’s response rate is calculated based on the completed and partial responses (unfinished but with at least one save button), i.e., saved responses (including partially completed ones) in relation to the viewed surveys.

Find out the average online survey response rate, according to the size of a business, sector, deployment medium, format, etc.

Survey Response Rates Vary According to Size of Business

Here are a few reminders before detailing the results:

Here is an instructive diagram showing the response rate. VSBs have the best results. There is also evidence that large enterprises receive the highest response rate to Pop-up surveys. There are lots of possible explanations for this. It could be because LEs’ brand image is stronger than Mid-Caps’ and SMBs’. LEs are seen as more trustworthy. 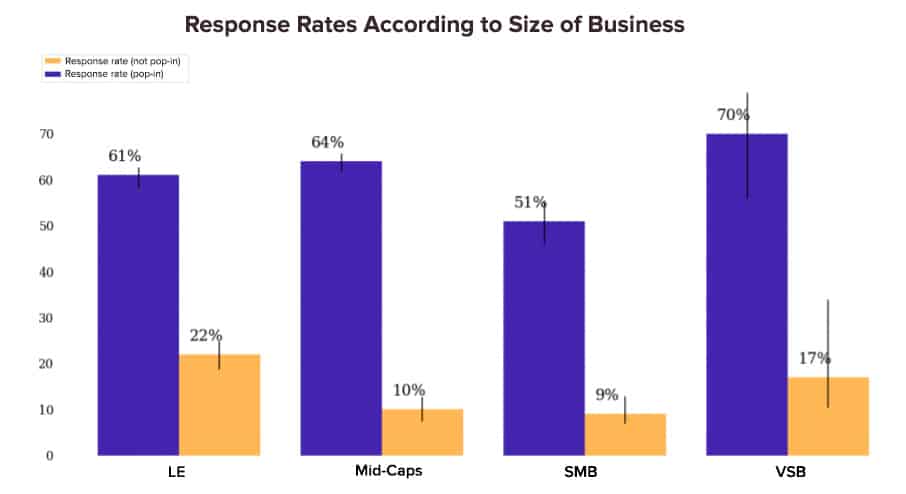 This graph uses an essential analysis axis: Pop-up/ Non Pop-up. They can be distinguished as follows:

However, these graphs help to see where you stand in relation to other businesses of your size. Let’s now look at how the response rate varies according to the industry.

The Education, energy and luxury industries collect the most customer feedback. Of course, the number of responses goes hand in hand with the number of customers and the size of the business. Which is why it’s so useful to look at the response rate. 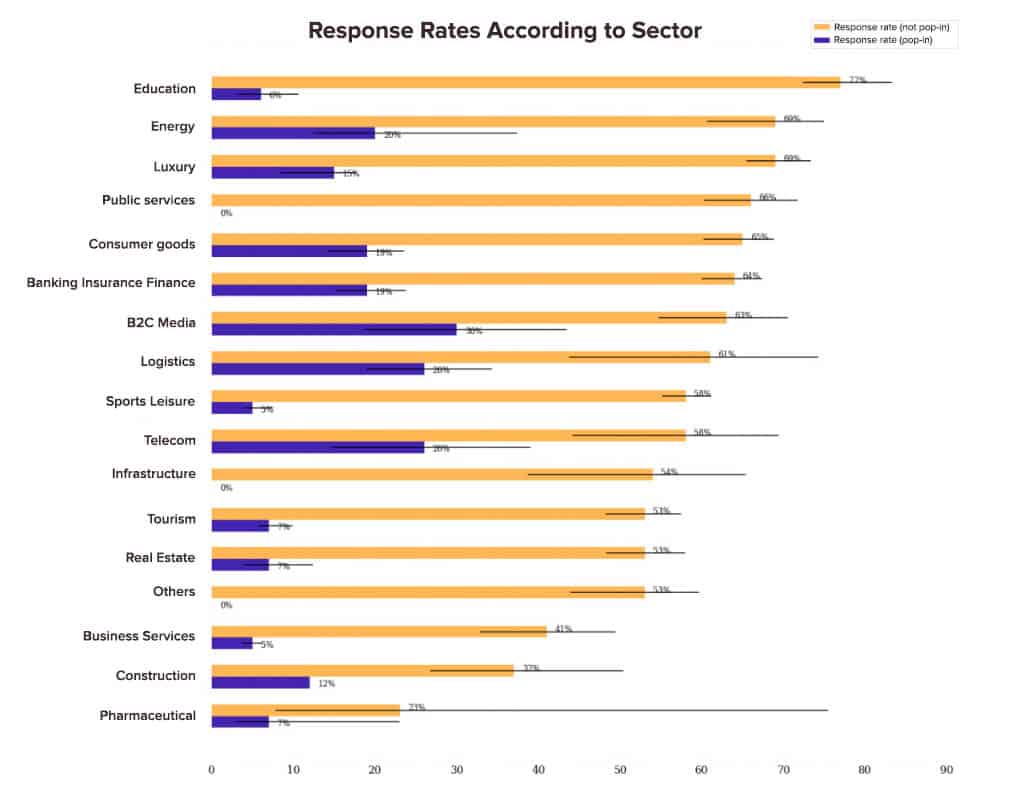 The response rate to Non-Popup surveys varies between 23% and 77% depending on the sector, and between 7% and 30% for Pop-up ones. Generally, these are the service sectors that see the best results.

Let’s look at another analysis axis.

Response Rates also Vary According to Medium or Deployment Channel

We compared survey performance based on their deployment channel: URL, email, website, others. Here are the results: 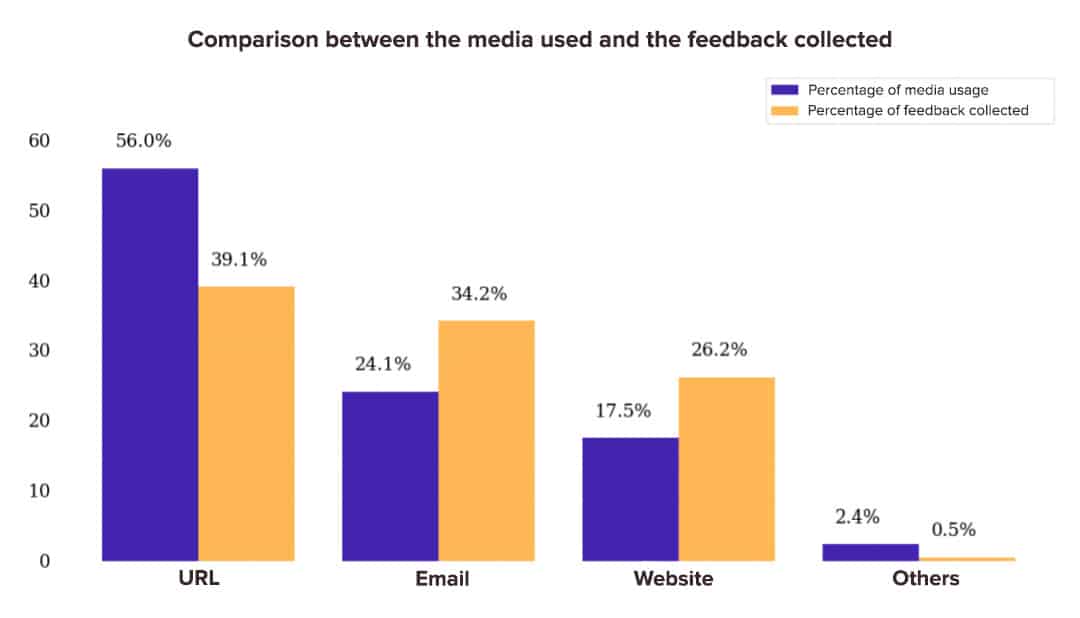 More than half of surveys are deployed through URL links, whether via social media or text, for example. URL surveys make up 56% of surveys but ‘only’ 39.1% of collected customer feedback. 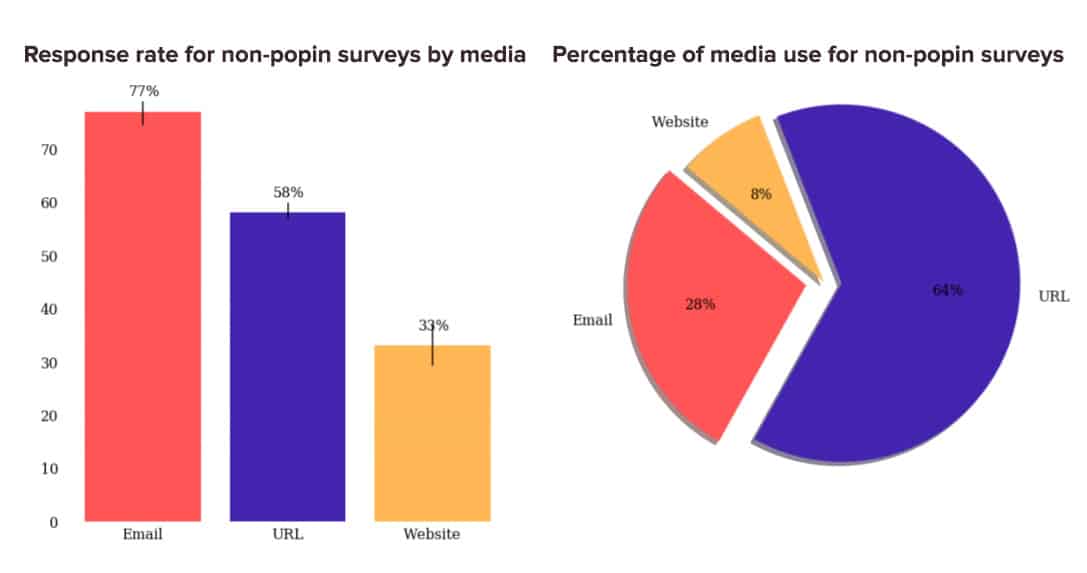 What is the Best Deployment Method for Website Surveys?

If you want to deploy a survey on your website, there are several options and formats: topbars, buttons, exit pop-ups, banners, etc. Which works the best and allows you to get the best survey response rate? We’ve crunched the numbers for you. Here are the results of our investigation:

The three formats that get the best response rate are: topbars, bottom bars and bottom buttons. Which leads to the conclusion that, generally speaking, placing the survey at the top and bottom of a page is more effective than on the side.

Does the Number of Questions on the First Page of a Survey Impact your Survey Response Rate?

These are the two main findings of this analysis:

We grouped the survey’s response rate and customer’s NPS profile together. The results tell us a lot.

The more customers with very high or very low NPS scores, the higher the response rate. In other words, very unhappy customers, or on the contrary, very satisfied ones are those that respond the most to surveys. This makes sense as we tend to respond to satisfaction surveys to express great satisfaction or great dissatisfaction. 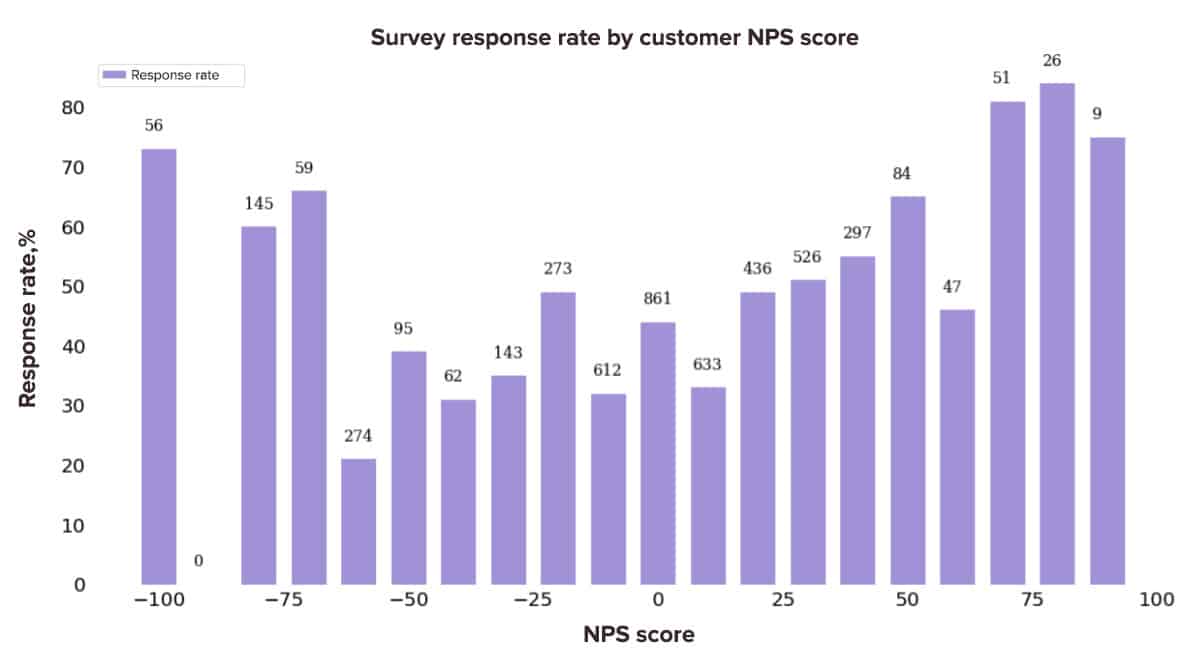 MyFeelBack allows you to deploy surveys on websites in a chat format: ChatSurveys. 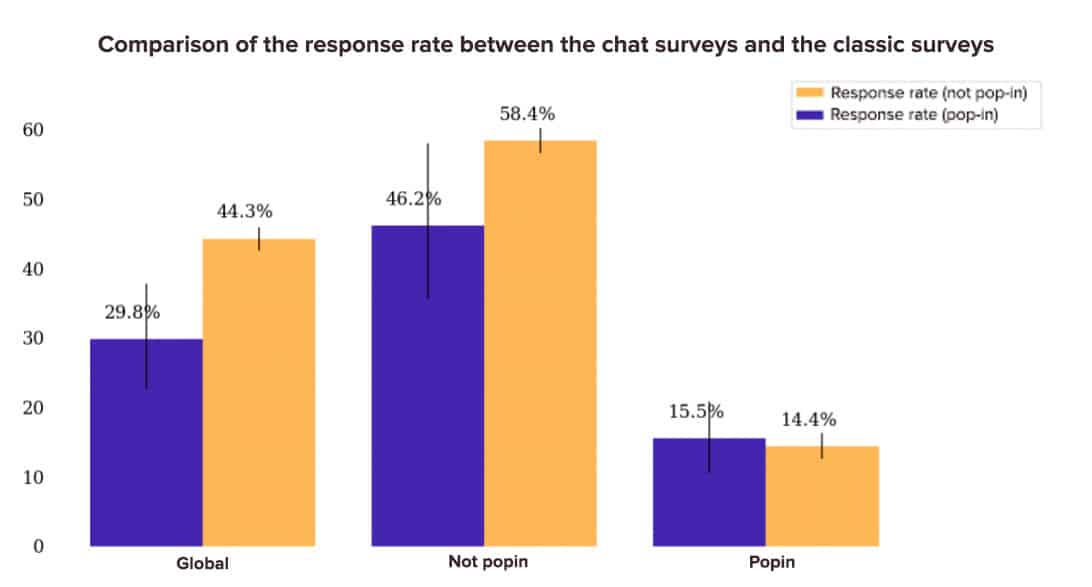 Generally, classic surveys have a better conversion rate than conversational surveys on non pop-up deployments. It seems that on Pop-ups, ChatSurvey has a better response rate, but the difference is not significant. We would need to expand the data sample analysed to validate the theory.

The Impact of Survey Personalisation on Response Rates

Is it good practice to include a personalised question on the first page of a survey? Here are the results of our analysis: 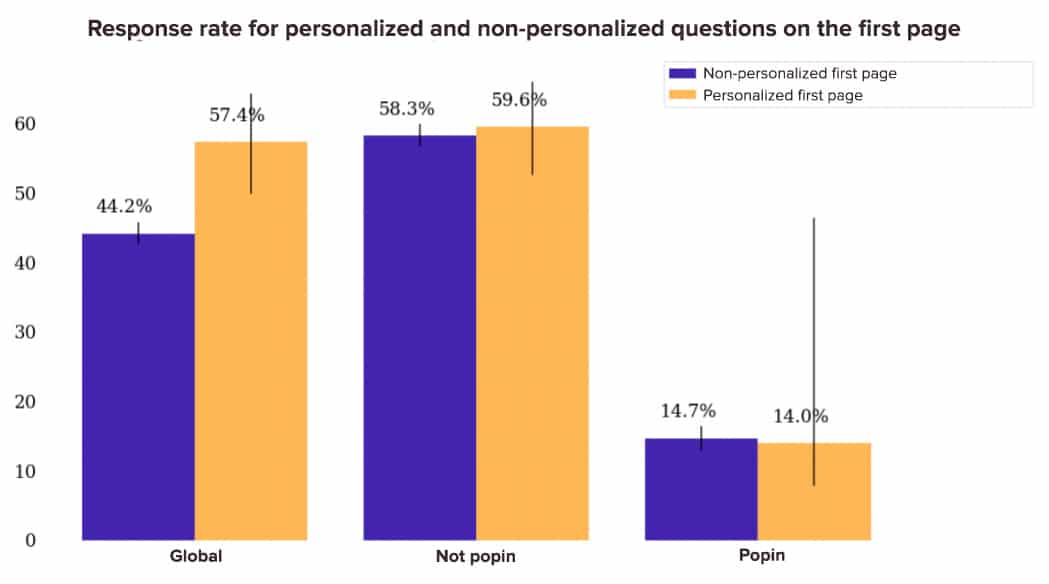 Does the response rate vary depending on the respondent’s device? The answer lies in the following graph: 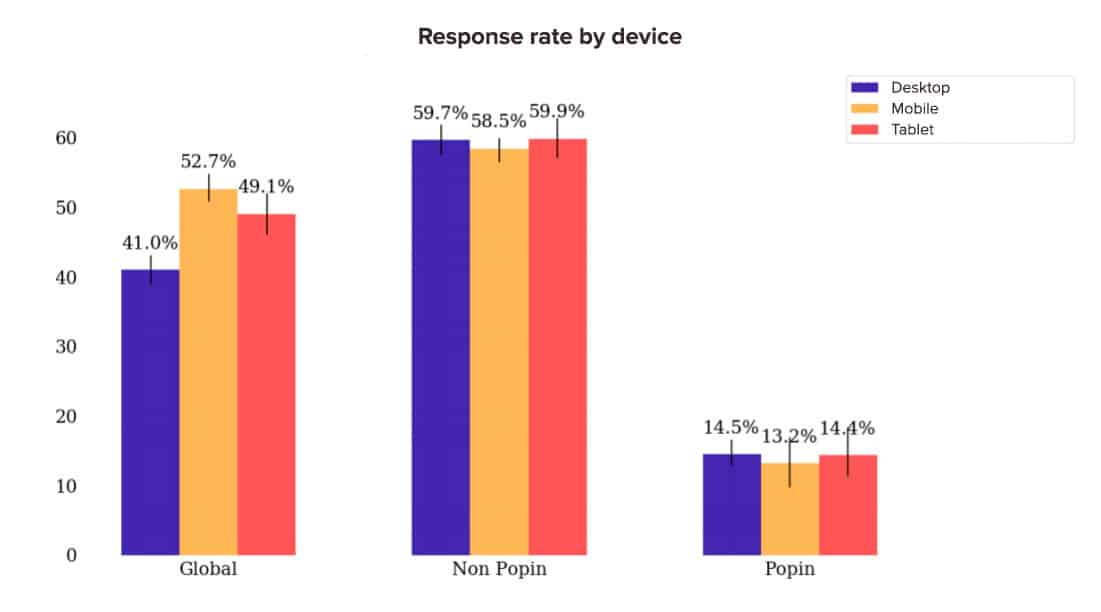 Generally, the differences aren’t very significant. Let’s go further in our analysis and compare the response rate of different mediums on devices: 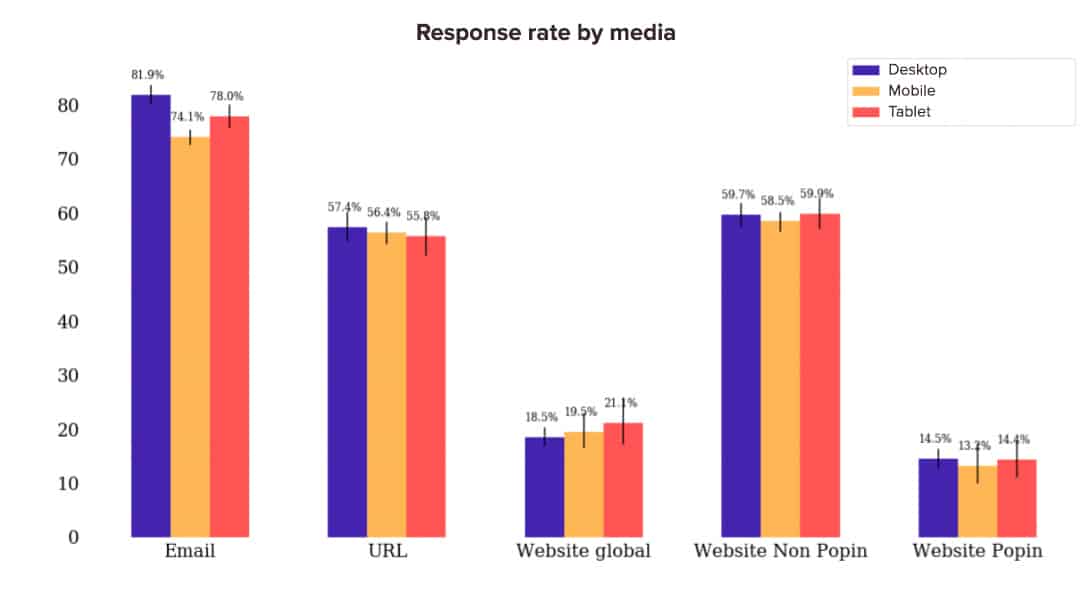 Only one significant result emerges, and it relates to email. The response rate of surveys deployed by email is higher on Desktop than on Tablet and higher on Tablet than on Mobile.

That sums up what we can say about the average survey response rate. It’s important to take a step back, of course, from the data we’ve shown you. But we hope that all of these statistics have given you an idea of an online survey’s average performance.