Over the years, Apple has developed a hit-and-miss reputation for customer service.

More than a few have faulted the company for its indifference to the customer who, at times, has seemed secondary to product and service.

Critics typically cite as evidence Steve Jobs statement that “It’s really hard to design products by focus groups. A lot of times, people don’t know what they want until you show it to them.”

But, just as many Apple supporters have argued that Job’s statement has largely been taken out of context. His dismissal of focus groups was not, by extension, a dismissal of customer voice or the necessity of gathering customer feedback. The reality is that Jobs did listen, and Apple continues to listen, very closely and systematically to its customers.

In 1997, Jobs spoke to attendees of the Apple Worldwide Developers Conference where he clearly stated that customers must be placed at the center of operations: “One of the things I’ve always found is that you’ve got to start with the customer experience and work backwards to the technology,” going on to explain how Apple’s vision and strategy begins with a simple question about the customer: “’What incredible benefits can we give to the customer? Where can we take the customer?’ Not starting with ‘Let’s sit down with the engineers and figure out what awesome technology we have and then how are we going to market that?’“

In recent years, Apple has consistently taken a top spot in customer satisfaction rankings. This is due, in part, to the fact that Apple relies on customer knowledge for innovation and improvement. Over the years, the company has adopted a variety of customer feedback strategies including, yes, market research to forge its path as a worldwide tech leader, always reminding customers that “Apple welcomes your feedback on its products.“

Feedback surveys have proven to be an especially useful way for Apple to gather customer insights. The company emails surveys to customers immediately after they have made a purchase. Customers are asked to rate their satisfaction level and how likely they are to purchase again. Because the surveys are sent immediately after a purchase, Apple is able to capture quick, accurate feedback while a transaction is still fresh in the customer’s mind. 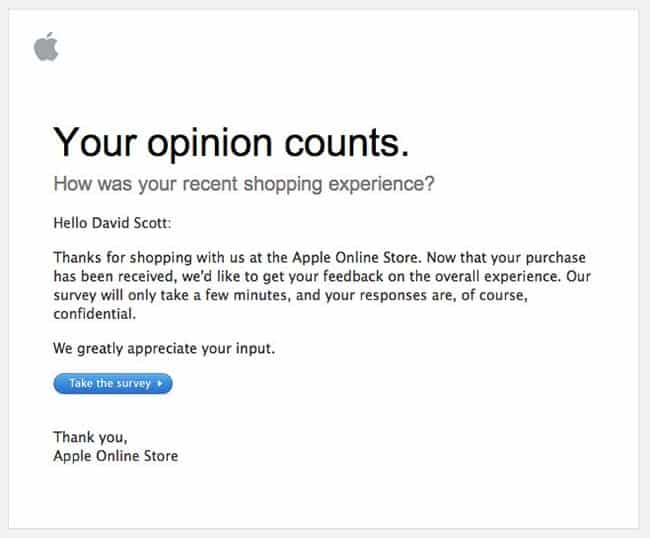 An especially important metric for Apple is the Net Promoter Score, which the company has long relied on. Feedback surveys include an embedded Net Promoter Score question, along with an open-ended follow up question: “Anything else on your mind?” In addition, Apple retail stores ask customers at point-of-transaction to rate their in-store experience.

Most recently, Apple has collected NPS responses to measure customer satisfaction with its new Apple Watch. NPS research has provided the company with valuable insights into its latest product. “Market research…measured a 97 percent customer satisfaction rate for Apple Watch and we hear from people every day about the impact it’s having on their health, their daily routines and how they communicate,” said CEO Tim Cook in a recent Apple earnings report. Thanks to NPS research, the company could see that, barely three months after the initial launch, its new product was a hit with the public. 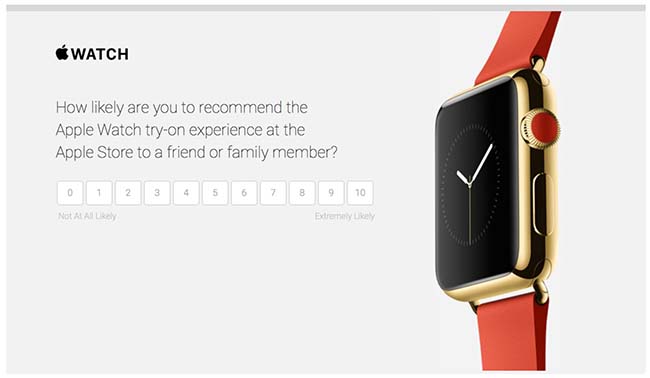 The Value of Customer Feedback

Although it started out as just another start-up, today, Apple is considered one of the most successful and influential companies in the world. And it got that way with no small help from listening to its customers. After all, Steve Jobs did not invent portable music devices or, even, the laptop. But, by listening to customers, giving them exactly what they wanted and expected, Apple was able to make these products simpler and easier to use.

Today, Apple continues to measure feedback and adapt to the results, a major reason for its continuing success. And while it remains one of the world’s biggest companies, Apple’s methods for collecting customer feedback are, fortunately, available to companies of any size.

Customer feedback is the key to getting to know them. If you don’t know them yet, Skeepers’ CX Management solution is what you were looking for.